There was a very good atmosphere when representatives of Organic Cities met Agriculture Commissioner Janusz Wojciechowski.

Organic Cities presented the Commissioner with their experiences in promoting access for all citizens to fresh, seasonal, and affordable organic food to support the climate and environmentally friendly farmers.

The Commissioner appreciated the cities’ work towards achieving the goals of the European Organic Action Plan by increasing demand for organic products. 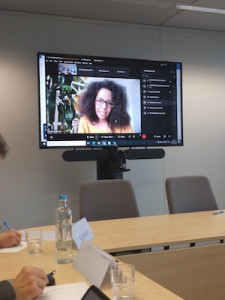 The 7-strong team of Organic Cities came from across Europe  and South America. They were Enno Nottelmann (President of Organic Cities, Minister of the Environment of the State of Bremen); Claudio Serafini, Director of Organic Cities; Britta Walthelm, Deputy Mayor for Environment and Health of the City of Nuremberg; Eva Erhard, for the City of Vienna, Director of the Bioforschungsinstitut Austria; Antonio Ferrentino, President of the Italian Network of Organic Cities; Moreno Botti, Mayor of the Tuscan municipality of Loro Ciuffenna. Adrey Pulvar, Deputy Mayor of Paris, took part via video from Brazil.  Representing the State of Bremen in Brussels were Tanja Baerman, Head of Representation, and Torsten Raff.